The histories of Korea and Vietnam are marked by many parallels. Before the traumas of division, civil war, and colonial occupation in the modern period, both were countries of “manifest civility,” polities ruled by an elite who prided themselves as cultural heirs to a Confucian antiquity. Both were countries touched by the scriptures of Mahayana Buddhism. Both confronted across uncertain boundaries an imperial China that was at once an existential threat and a source of cultural inspiration. Behind these parallels are also stark differences in historical trajectory, but little work in cultural or literary history have sought to place Vietnam and Korea’s early modern past in proper comparison.1

Geographic distance is one reason for the neglect, but it is a factor exacerbated by a larger disciplinary problem in Asian literary studies, where Vietnam is considered part of Southeast Asia and Korea part of northeast Asia, meaning that few scholars have even considered the potential for “connected” approach to this issue.

Indeed, even though direct cultural and intellectual exchange was relatively sparse over the centuries, Korean and Vietnamese scholar-elites were well aware of each other’s existence. When the Vietnamese envoy Phùng Khắc Khoan (馮克寬 1528–1613) met a Korean counterpart, Yi Sugwang (李睟光 1563–1628) in Ming Beijing in 1598, the two engaged in a spirited poetic exchange, one that affirmed shared cultural affinities to a shared cultural inheritance marked by “manifest civility” (文獻之邦) and governed by “ritual and mores” (禮義之邦), while stirring a sense of rivalry over this shared heritage. 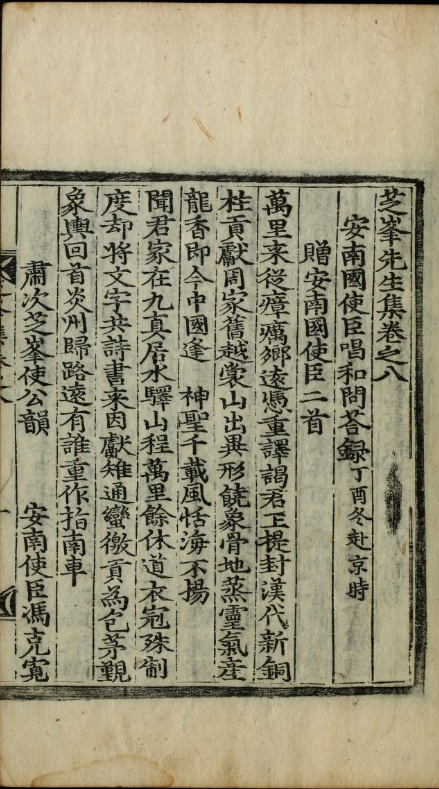 “Although we two come from different mountains and seas, we take the same sagely books as our source”

Yi and Phùng’s exchange, however, is but the tip of the iceberg. In his work Lost Modernities, one of the few works that take Korean-Vietnamese comparison in earnest, Alexander Woodside noted the precocity of their sense of political (if not national) identity and bureaucratic governments whose sophistication would have been the envy of monarchs across Eurasia. Yet, more work remains to be done to recover these lost modernities and properly connect the histories of these two important regions.

This conference brings together scholars interested in Korean-Vietnamese in dialogue with one another from across North America, Europe, and Asia in order to develop a framework for meaningful future collaboration. It will examine Vietnam and Korea through both a “connected” perspective and comparative lens. A “connected” perspective emphasizes linkages and circulations, namely the flow of ideas, texts, people and objects. A comparative lens hones in on issues of historical process and the convergence or divergence of particular institutions, cultural patterns, or social configurations.

The resulting discussions will move against a view of East Asia that emphasizes central-peripheral interactions. The conference therefore juxtaposes Korea and Vietnam in terms of one another, an effort at “minor transnationalism” rather than as peripheral actors to a dominant China or case studies of China in “miniature.”2

In line with this methodological focus, the conference invites participants to think through these questions: How did texts, information, religious ideas, and people circulate in Vietnam and Korea during this period? What does the circulation of specific texts and their use in each country tell us about Vietnam and Korea’s literary and intellectual history? What insights does a comparative or connected perspective add to our understanding of their traditions of law and statecraft? While both ostensibly members of the same “Sinoscript cosmopolis,” Korea and Vietnam were arguably at “opposite” ends of this ecumenical zone, often leaving encounters between individual Vietnamese or Koreans as moments of anecdotal significance. Can we reconstruct broader understandings about how Vietnamese and Koreans perceived one another or trace the kinds of connections that linked them, and the sorts of barriers that kept them apart? How did knowledge of one or another affect their understanding of the world they lived in? In addition to intellectual and literary histories, the issue of “connectivity” extends also to the realm of material circulations; book culture and environmental history are among other topics to be covered.